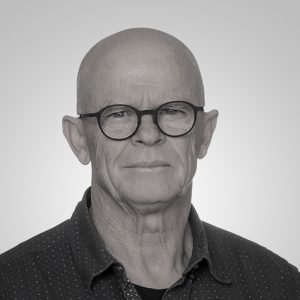 Grant has spent most of his fifty plus years in the building industry as an employee in some of the most respected architectural companies in NZ. He originally trained as a draughtsman before entering the Auckland School of Architecture, where he graduated with honors.

Warren and Mahoney Architects employed Grant for fifteen years, where he worked on many award-winning buildings.

Grant was a Director at Ignite and was part of the management team responsible for running a practice of fifty plus people alongside being the Architect responsible for the design and delivery of projects.

During this time, he was also involved with lecturing at Auckland University – School of Architecture – and attended the Glenn Murcutt Master Class at Newcastle University.

In 2007 Grant left Ignite Architects & moved to Whangarei where he partnered with Ian Butt to form Harris Butt Architecture Ltd (HB Architecture). During the past 15 years, Ian and Grant have collaborated on several projects, including the Waitangi National Trust Gateway and Amenities buildings, the multi-award winning Knoll Ridge Café on Mt. Ruapehu, and The Hub – new premises for the Whangarei Art Museum & Heritage Trail.

Since Ian’s retirement in 2017, Grant is the sole Director / Architect with an overview of design, documentation, and project delivery.

The last few years have seen Grant involved with several significant commercial projects such as the Hundertwasser Arts Centre in Whangarei, Te Kongahu Museum of Waitangi and Te Rau Aroha including the associated function centre, Tahuaroa.  He also worked on Stage 1 of the new auditorium for the Salvation Army Building, the new Kaipara Service Centre for the Northland Regional Council, and the very popular Quail Café located in the stunning Quarry Gardens.

In addition to these commercial projects, Grant has also been busy with a number of high-end residential builds including the Matapouri Pavilion and the Marsden Cove House.